ETSI and the world of vertical mobility: important results for EFESME and SBS

Over the years, the ETSI Smaert M2M Commission has published several key documents for European lift SMEs. On the basis of the work and activities carried out by the EFESME& SBS expert involved, Mr. Marco Cogliati, rapporteur of the last three published documents on lifts and escalators, find here belowan historical and technical overview of these important developments.

After careful consideration and preliminary studies, but above all a desire expressed by EFESME and SBS's experts, an in-depth study was undertaken in 2019 on the IoT world in relation to the world of vertical mobility. With the support of SBS, EFESME provided along the years a group of experts who could study the possible developments of the lift world in a field that is now in total and rapid expansion, that of the Internet of Things.

With the current presence of an expert, Mr. Marco Cogliati, in the TC SmartM2M of ETSI (European Telecommunications Standards Institute), an attempt was made to develop documents that could guide the lift world towards a pushed digitalisation.
Two documents were published by ETSI in 2020 and 2021, respectively the technical report TR 103.546 - Requirements & Feasibility study for Smart Lifts in IoT in 2020 and the technical specification TS 103.735 - Smart Lifts IoT System in the following year, which are the lift industry's first approach to the digital world.

The work of the experts involved in these projects was not easy, precisely because of the difficulties involved in connecting the analogue world (lift) to the IoT world. After an initial approach with the Technical Report, they moved on to the drafting of the Technical Specification. The result obtained by the expert group on these two aforementioned deliverables was evaluated very positively by the telecommunications engineers taking part in the SmartM2M TC, and for this reason a positive vote was taken for the drafting of a new TS concerning the integration of the world of stairs and escalators into IoT systems.

TS 103.849, entitled 'Smart Escalator - IoT system', in the same way as the one for lifts, provides a set of specifications concerning the configuration of data and signals for escalators and moving walks in more or less complex IoT systems. It was published on the 11th August, a month ahead of schedule.

The SmartM2M TC delegated a specific 'ad hoc group', consisting of IoT and escalator and moving walkway system experts representing both European SMEs (SBS/EFESME) and large manufacturers and multinational companies (ELA/Schindler). The rapporteur for this TS, as well as for the previous TR and TS on smart Lifts, was again Mr. Marco Cogliati, the EFESME & SBS expert representing the lift sector and its SMEs, who is present within Smart M2M thanks to the continuous support of SBS. The fact that Mr. Cogliati has been chosen three times to represent such important documents for lift SMEs is testimony both to their importance in the sector and to the excellent work carried out by the expert with the support of EFESME and SBS.

The work of the technicians has been developed in synergy and in this way a document has been created that is similar to that previously published on lifts; the choice to keep the same approach in reference to the documents produced was made on purpose in order to give a univocal line to the approach of vertical mobility systems in the digital world.
In this context, the technical specification analyses the architecture of the IoT system for stairs and moving walkways; type and origin of data, units of measurement and all the information required to enable the digital platform to correctly process the information received from a staircase or a larger group of stairs or moving walkways. 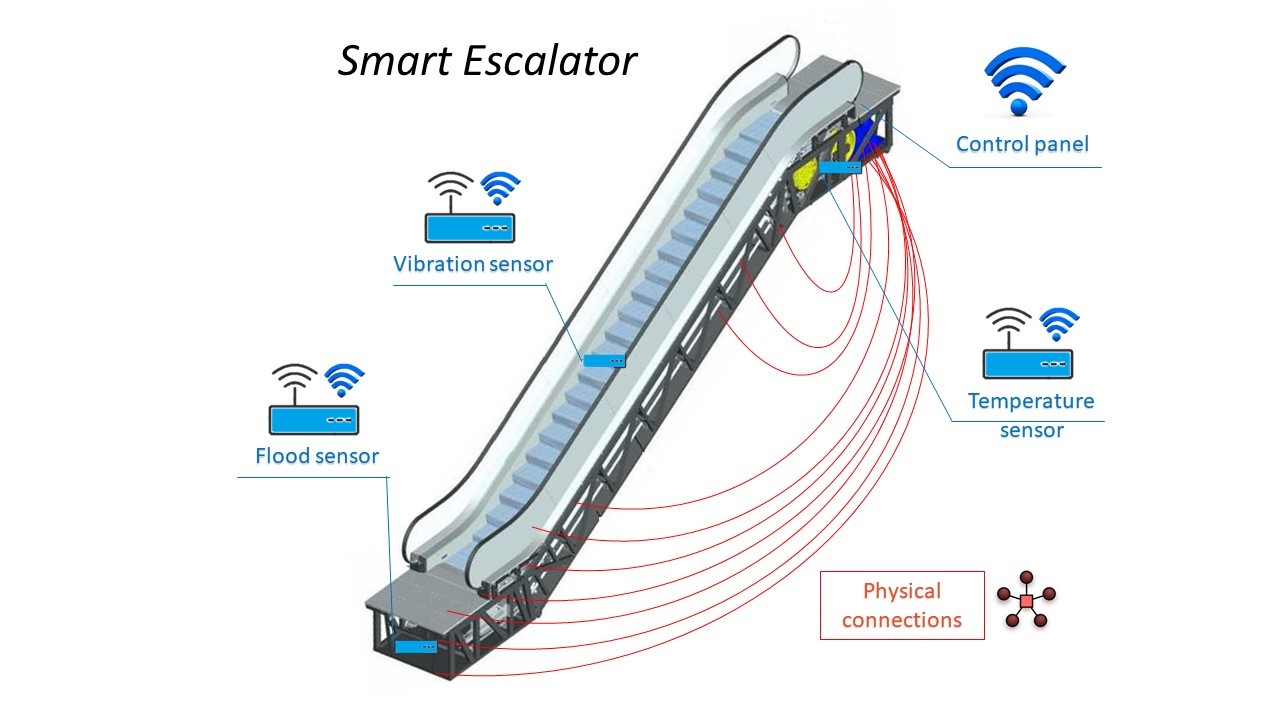 Specific sections delve into identifying and unique data to identify the scale or treadmill, then administrative, management and geolocation data. For example, in Chapter 5 of the document, in addition to the architecture of the system, the security, privacy and cybersecurity part are approached, as well as specifically addressing interoperability with the OneM2M platform.

In developing the document, the experts considered it important to include a series of construction characteristics that identify the machine, such as design data and regulatory references, electrical data, the date of installation or the date of the last modernisation carried out, all movement and alarm signals, e.g. the fire alarm, signals from specific sensors (temperature, vibration, water, speed, etc.). More specifically, the document contains chapters dedicated to all signals, whether status signals, error signals, statistical signals or those from 'real time mode'.
As in the twin specification for "Smart Lifts", general commands and the part relating to the communication system, both configuration and signal, are described.

Finally, TS 103.849, after following its internal process and after editorial and formal verification, was approved by the TC SmartM2M committee and published in August 2022, one month ahead of schedule.

To complete this ambitious framework of useful deliverables for the sector, in the coming months the experts of the TC SmartM2M- ad hoc group Lifts will work on a new version of the technical specification TS 103.735 "Smart lifts - IoT system" to align the contents of the document to the state of the art with respect to the ICT (Information and Communications Technology) part, thus incorporating some suggestions from the stekolders and technicians in the sector.
Furthermore, it is of utmost importance to mention and point out that Mr. Marco Cogliati's role as rapporteur in all three published documents represents not only the excellent work done by the expert supported by EFESME & SBS, but also the considerable role played by the SME experience in developing these documents. The day-to-day experience of SMEs, the information they can bring to the table, always provides relevant insights for developing useful documents, and the presence of the expert representing them ensures that these deliverables are as SME-friendly as possible.