This year, the annual National Association of Elevator Contractors (NAEC) Expo & Convention took place in Louisville, Kentucky, between the 18th and the 21st September.

At the kind invitation of the NAEC Team and of its General Manager, Mr. John Tolar, EFESME took part in the meeting in the person of its President, Mr. Massimo Bezzi. The Expo & Convention was another important opportunity to talk about lift SMEs in Europe, their work and potential, and the many activities that EFESME, as the European Federation representing them, is carrying out in the technical-political sphere to support them in the best possible way.

President Bezzi's speech was on Tuesday 20th, during the panel "Presentation on the Quarterly Global Industry Survey/InterLIFT", dedicated to the most recent news and updates from the lift industry, especially in Europe.
On his part, the President gave an overview of several topics from the lift SMEs point of view, such as:

✅ The role of EFESME as the voice of lift SMEs in Europe, and its lobbying activities with the European institutions to support SMEs in the sector, and to promote the creation of a working and regulatory, as well as educational, environment that enables them to realise their full potential;
✅ The technical activities of the EFESME experts both in the field of standardisation and in policy-making;
✅ The activities developed with our partners, such as SBS - Small Business Standards and SMEunited, both from a technical and regulatory point of view, and from a political point of view, so that the demands and positions of SMEs can be represented by strong stakeholders at the work tables that matter;
✅ The most recent development in European and international standardisation in the lift sector, and how the interconnection between several standards reality has the potential to create a market and en environment in which European lift SMEs can thrive and show fully their creativity and potential.
➡️ Find President Bezzi's presentation HERE 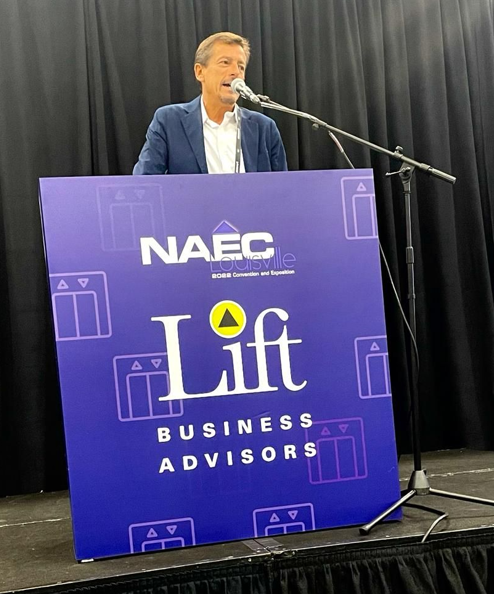 (EFESME President, Mr. Massimo Bezzi, during his speech at the Expo & Convention)

The National Association of Elevator Contractors, year after years, conference after conference, has proven itsefl to be another great and essential occasion to meet the stakeholders in the lift industry, and discuss the importane of small businesses.

The American market, although different from the European one in many respects, nevertheless expresses some common instances with its overseas counterpart, which can find their meeting point thanks to standards - another point dear to EFESME and emphasised by its President, namely how a convergence, finally global, of standards and their contents, has enormous potential for European lift SMEs. To do this, the standards and the environment that will be created must essentially be tailored to and for the benefit of SMEs, a mission that is the cornerstone of all the activities of the Federation, its members, its experts, and its closest partners in Europe.

EFESME thanks NAEC and its staff for the opportunity and the interesting conference, in the belief that such a participation of the Federation may become, in the coming years, an opportunity to be repeated, in order to strengthen collaboration and exchange of ideas and information.